Vacuum induction melting furnace is a kind of vacuum electric furnace in the metallurgical industry for melting special alloy steels such as heat-resistant alloys, magnetic materials, electrical materials and high-strength steels. Its working principle is that in the vacuum environment, alternating current is applied to the induction coil to generate an alternating magnetic field, and the alternating magnetic field induces an alternating current â€œa vortexâ€ on the charge, and the charge is heated and melted by a â€œvortexâ€. Compared with other types of electric furnaces, vacuum induction furnaces have the advantages of high heating speed, high productivity of equipment, and low oxidation loss. Metals are melted in the crucible. Because of the electromagnetic stirring function, they are conducive to degasification and homogenization of alloy components. . Through the analysis of the production conditions of the 3t/6t vacuum induction furnace of the Fuzhou Iron and Steel Group of Dongbei Special Steel Group, it was found that the operation process was completely determined by human experience, and the automation level of its smelting was relatively low, making the operation of the furnace unstable, resulting in product quality failure. Standards, high energy consumption problems, 2, so that it can not give full play to the advantages of vacuum induction furnace.

The vacuum induction melting process involves extremely complex physical and chemical reactions and cannot observe its internal working process. Therefore, it is very difficult to model and optimize from its operating mechanism process. In view of this, this article uses the neural network modeling method to find a mathematical model that can describe the smelting process. Based on this model, a genetic algorithm is used to optimize the control of the input electric energy, and the optimization operation of the smelting process can be realized to ensure the product. Quality and achieve energy savings.

The power supply system used in the melting period is a way to gradually increase power. The power input can be approximated as a linear law. Then the initial power input power change degree (ie, the slope of the straight line) k, and the power supply time t, these three variables determine the melting speed. The melting rate, the amount of charge into the furnace, and the initial gas content of the charge Xi are important parameters that determine the change in vacuum during the smelting period. For the same steel grade, the same raw materials are required, so the initial gas content is a certain value and no detection is required. In this way, it is possible to establish an input initial power where the input power change degree k, the power supply time t, and the charged charge quantity W are input variables. The total pressure value Ts in the furnace and the critical pressure value Tc indicating the end of the melting period are output. Four input and two output models. Because of the serious non-linearity between the input variables and the output variables, it can not be described by the conventional mathematical model, and the neural network can approximate any nonlinear function 4, so this paper uses neural network modeling.

21BP neural network BP neural network is a one-way propagation multi-layer forward network. In addition to the input and output nodes, the network has one or more hidden layer nodes, and there is no coupling in the same layer nodes. The input signal passes through each hidden layer node in turn from the input layer node and then passes to the output node. The output of each layer node only affects the output of the next layer of nodes. The transfer function of the node is usually Sigmoid type, that is, the BP network can be seen as a highly nonlinear mapping from input to output, that is: / (X) = Y. where R is a real number field; m, n is a dimension X and Y are input and output vectors, respectively. For the set of samples: the input x/(6Rn) and the output y/(6R*), it can be assumed that there is a certain mapping g such that the mapping needs to be found such that / is a best approximation of g in a certain sense.

22BP network design and training From the above we can see that the process is a multi-input dual-output system, the establishment of a neural network model as shown, the network is a total of three layers, the input node is 4, corresponding to the input initial power Po, input power changes There are two output nodes of degree k, power supply time t, and furnace charge quantity W, which correspond to the total sum of pressure values â€‹â€‹Tsum in the furnace and the critical pressure value Tc indicating the end of the melting period. The number of nodes in the hidden layer is determined by the training results. Hidden layer transfer letter This article takes the 3t/6t vacuum induction furnace production process as an object, and simulates and researches based on the data actually recorded in the production process. Due to the high operating costs of vacuum induction furnaces, it is not possible to carry out a large number of. Then, after completing training, the BP neural network forms a connection relationship between the input and output that can map the internal relationship between the power supply system and the degree of degasification, and can be used as a mathematical model for simulation experiments.

3.1 Determination of the optimization objective function The size of the input electric energy in the melting period can be calculated as follows: The objective function of the optimization is 3.2 Constraints Considering the melting process and the performance of the furnace itself, smelting must satisfy the following constraints: The maximum input power is less than the rated input power of the furnace Melting time. For a 3t charge, typically the maximum melting time is less than s, which is the critical pressure value Tc at the end of the melting period. The genetic algorithm is an iterative process with "generate + test" is a population type operation. The algorithm targets all individuals in the population. Genetic algorithms include the following basic elements: (1) parameter coding; (2) population generation; (3) fitness function design; (4) genetic manipulation. It includes the following three basic genetic operators: selection, crossover, and mutation that give it features that other traditional methods do not have.

In this paper, the penalty function strategy is used to deal with the constraints. The fitness function can be expressed as the following form: it is a step function. Therefore, the initial population of the model is chosen to be 20, and the selection operator adopts the optimal retention strategy. That is, a certain number of individuals in the parental generation are selected to directly enter the next generation. The crossover operator uses a non-uniform arithmetic crossover mode. Because the population of the model is not too large, mutation operations are not used in evolutionary calculations. The flow chart of the algorithm for solving the optimization model is shown.

3.4 Simulation results In this paper, the 20-furnace smelting operation of a certain steel grade was optimized and compared with the actual process value. The result of the operation input power Q can be seen that the optimized power input value Qo is higher than the original value. The input value Q is low.

The optimization results show that under the premise of guaranteeing the process requirements in the melting period, according to the corresponding optimization of the input value of electric energy for production operations, the furnace can be in the best working conditions and energy consumption can be saved, thus reflecting the superiority and effectiveness of the optimized control. Sex.

4 Conclusions This article takes the input energy optimization control of the 3t/6t vacuum induction furnace melting period as the research object. In June 2003, a neural network was used to establish the mathematical model of the melting period production process, and the genetic algorithm was used to optimize the input power. The optimization operation shows that the method is effective and practical. However, due to the fact that the source of the data cannot cover all cases, and it has certain errors in itself, the model proposed and the proposed optimization method have certain errors.

But it applies under a certain range and conditions. This research work has practical significance for the application of intelligent algorithms in vacuum induction furnaces.

Introduction of Hot Continuous Rolling Dynamic Load Distribution System In the National Science and Technology 'Ninth Five-Year Plan', the Iron and Steel Research Institute, Beijing Automation Research Institute and Baoshan Iron and Steel Group Co., Ltd. jointly developed a hot rolling dynamic load distribution system. For hot strip mills, for example, the state variables include thickness, plate crown, flatness, tension, and temperature, a total of 34; the control variables are roll gap, speed, bending force, and roll crown (or CVC traverse , etc., a total of 28; rolling mill parameters are rolling mill stiffness and plate stiffness (or lateral stiffness) independent variables, etc. 14; other variables are rolling stiffness and roll real-time convexity, etc.. For such a complex system A good control scheme should adopt a hierarchical hierarchical intelligent control system whose core technology is dynamic load distribution and its implementation in hot strip rolling production.General dynamic load distribution is the distribution of different reduction ratios in a roll change cycle to make each roll steel plate The change of crown change is reduced, and the second type of dynamic load distribution is to change the distribution once every 5s during the rolling process of the same coil to keep the variation of the crown of the coil steel minimal. The four-dimensional rolling difference equation proves that the rolling process is a measurable and controllable, steady-state linear system, and that the thickness is the control quantity of the two-dimensional plate-shaped difference equation and the quadratic objective function, and the Bellman dynamic programming is used to solve the problem. The optimal dynamic load distribution is achieved by changing the AGC pressure and the setting value of the roll gap, and the change in roll crown can be estimated in real time using the two-dimensional shape difference equation with roll dynamic crown and bending force as control variables. The best bending force setting.The key issues for realizing dynamic load distribution in a hot strip mill are: K-estimation of hot strip mill, dynamic setting of AGC application in hot strip mill and realization of constant tension control Has successfully tested on the 2050mm hot strip mill of Baoshan Iron & Steel Co., Ltd. and dynamically set AGC to replace the Siemens thick control model to significantly improve the thickness accuracy of the product. The standard deviation is less than 0.02mm (as thin as about 0.01mm). It was officially established in July 1996. The mill has been operating normally since the AGC system was dynamically set up (all in one rack) and the system can be applied to all kinds of strip rolling mills (hot and cold rolling mills, plate mills and reversible cold mills). Can save a lot of investment in equipment, daily production can reduce energy consumption, save costs and improve competitiveness of their products. (Iron and Steel Research Institute of Zhang)

2.You can choose any brand,include cascade.

3.It can help you to lift something in circle. 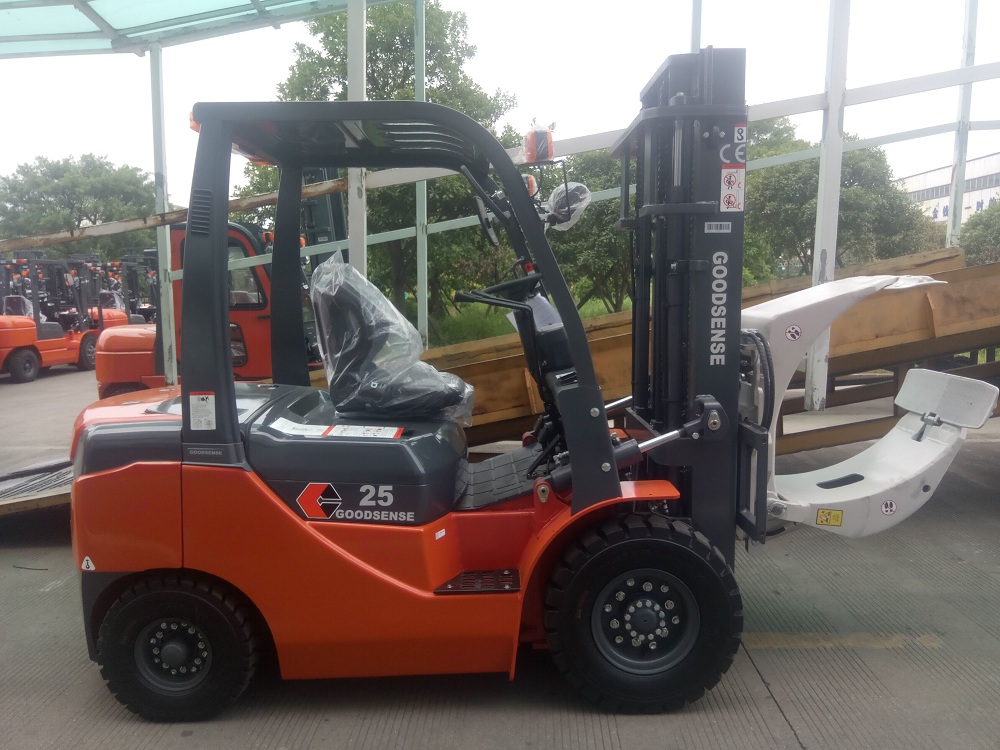 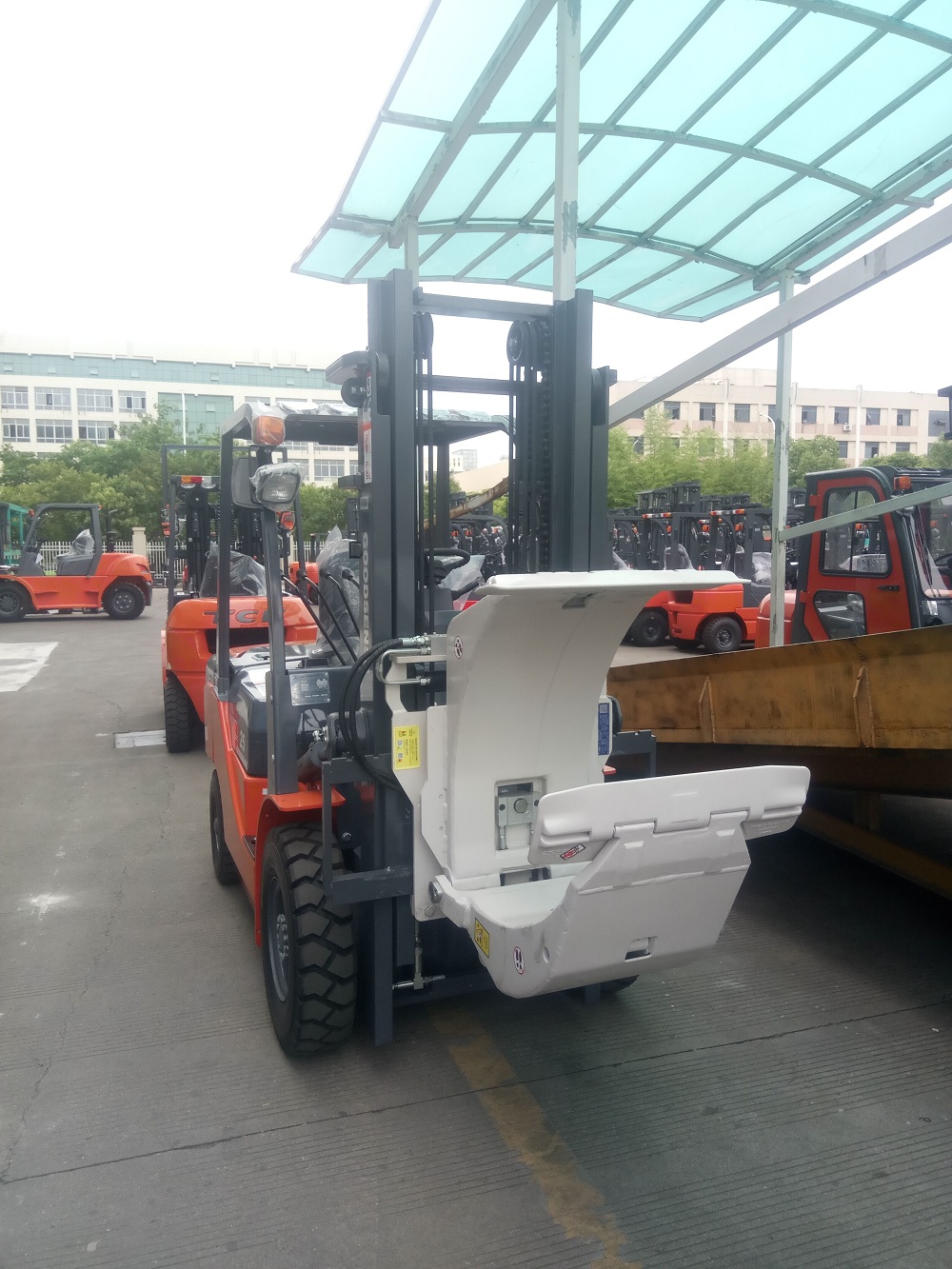 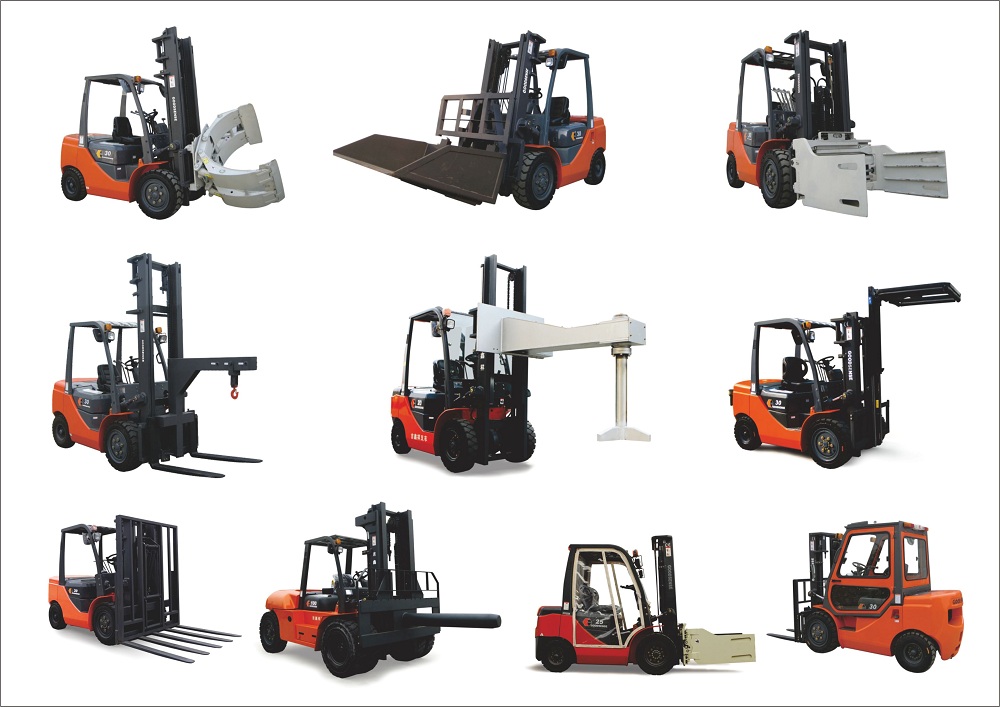 1.Every kinds of forklift.

If you have any other questions,please contact us directly.Our product are all with high quality.And we invite you to visit our factory.